I like working in software, but for the good of anyone who meets me at party I need another hobby. Saying you work in software and your hobby is writing more software tends to glaze over peoples' eyes and start them looking around the room for anyone else to talk to. I don't blame them.

I've found the older I get, my tolerance has declined for people who define themselves by what they don't like. Put another way: I like people who like things. I don't really care what it is (within reason), I want to hear about what you like. The more novel the better, as far as I'm concerned. In that vein, it has bugged me that I don't really have something I'm devoting time to. I have many interests; I like soccer and cooking, chess and languages. I like making music at least a little bit. But I have been feeling it's really time to explore something completely different.

One Badly Driven Screw at a Time

I bought a house a few years back and it became immediately evident that I can barely swing a hammer. My father, for all his considerable talents, is not shall we say handy. I had no model growing up for fixing it, no matter what it was. But I've got this house now and there's lots that's broken. So I've been trying to slowly build my skill set around the house. Luckily for me, my father-in-law is an engineer and has taught me a few things with evergreen patience and kindness.

If working in software has taught me anything, it's that there's a whole world of knowledge out there and that the hardest part about learning on the information superhighway is filtering out bad information. For home repair, this is certainly as true as it's ever been. Youtube is bursting at the seems with oddly lit, slowly paced handymen—well, handypeople who tend overwhelmingly to be male— videos. Filtering out good content in that world is hard, but I did come across a channel that gave me the feeling of running into a friend I hadn't seen in forever: This Old House.

Among the This Old House videos (thank you, Youtube suggestion engine), I found this video of the TOH guy talking with a hirsute gentleman I recognize from TV:

The part where he talks about how woodworking is really nothing more than chiseling wood with sharpened steel and sanding it really intrigued me. I was struck by the utter simplicity of it all. As with most skilled practitioners, he makes it look easier than I've found it to be, but I'm embracing another well-known concept in this field: wabi-sabi.

More than anything, I'm enjoying and embracing being a beginner at something again. It's especially pleasing that it doesn't involve ones and zeroes. Though it's easy to sink a big bucket full of cash into this hobby before actually making anything, I've been trying to start small and practical.

My first project was pragmatic: sawhorses. I don't really have a great shop space and I definitely don't have anything mobile to work on while doing outside home repair. My father-in-law and I were planning to do some work on my gazebo—that's what we call our detached porch— and so this seemed like a good first project. Armed only with a clamp and a circular saw, I set out to follow the plans from a Youtuber I really like named Steve Ramsey. Without the accurate, repeatable cuts of a table saw my sawhorses looked more like inbred saw donkeys but they indeed stood and bore weight. Not as much weight as was required, it would turn out.

When we got the treated plywood we were using for the gazebo project onto my saw donkeys, the screws in the hinges gave way with a loud and sad thud. The donkeys were no more. So I decided to send my first project to the glue factory. Thankfully, I was able to salvage the wood to make my next project.

My wife and I recently had our first child (yay) and so I'm up to my elbows in dirty diapers. Luckily for me and my lower back, my father-in-law built us a changing station that sits on top of the old dresser we were going to use. The new elevated changing station means that I get to change my son at chest height and not waist height. My only minor gripe is that it may actually be at shoulder height, which feels a bit too tall. So I took the 2x4s I salvaged from my sawhorses and cut them down on my new table saw. I glued them up and clamped them together until I had made my first laminated board. I attached some furniture sliders to the bottom et voilà, Project 1 was complete.

Why aren't the sawhorses called Project 1? Because I'm a software engineer and we zero index things. The sawhorses were Project 0. I'm working on re-doing those too.

With no jointer and no planer, I did the best I could. I think it looks ok for my first glue up. Best of all, it does the needful and it was fun to watch it come together. That's what's really important. 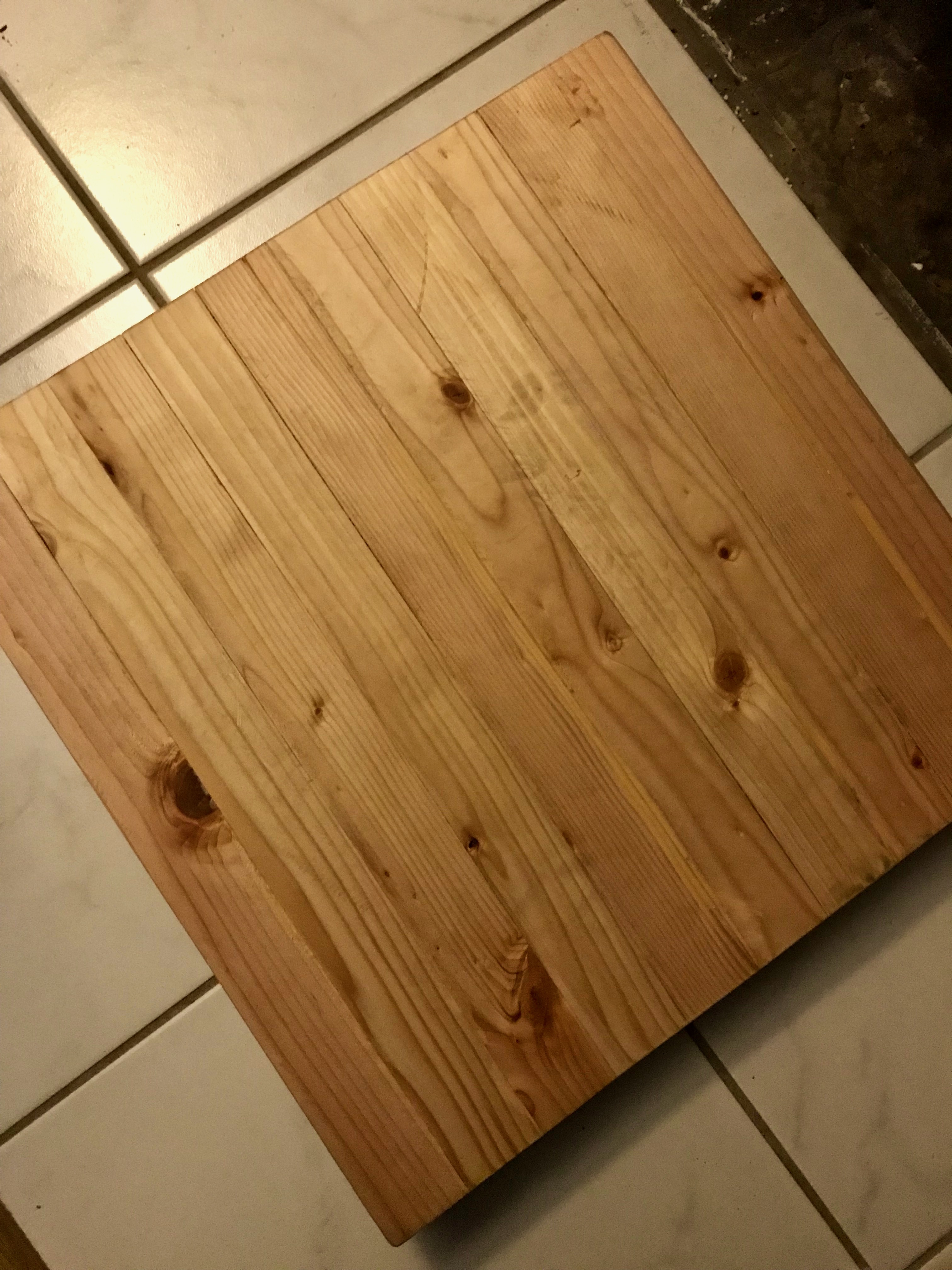